.
Summary:
Before getting into the heart of Unit 4, we took a day to complete one of my favorite lessons: the Hawks and Field Mice Lab. The rules of the game are simple. Each student is a predator. Their prey are little paper mice* that come in three colors: green, yellow, and black. During each round of the game, the students get 60 seconds to walk up onto the stage and find a mouse. Between each round, the mice reproduce. Meanwhile, the entire class keeps track of the populations. 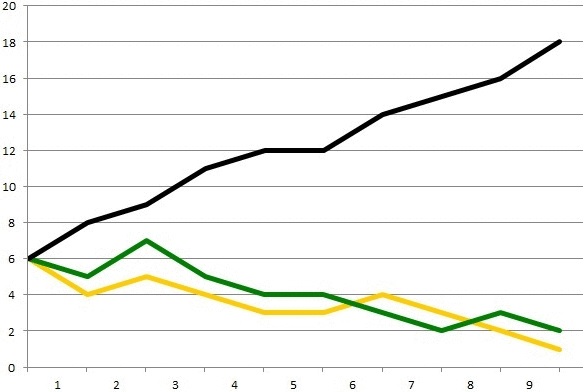 The results are exactly what you’d expect. The black mice are able to blend in with the dark  auditorium stage. The yellow and green mice are found more quickly and more often. After a few rounds, the majority of the surviving mice were black. And just like in real life, when mouse reproduction was simulated, most of the mouse babies were also black.

But a better way to explain the lab would be to say that “the mice evolved.” Over time, the population of mice developed camouflage. Our paper mice were not aware that they were developing camouflage, nor were our human predators. And yet, by the end of the game, the population seemed to fit its environment almost perfectly. Before the lesson, I tell the students it’s a lab about the predator/prey relationship. It’s not! It’s really a lab about evolution. The students just don’t know it yet.

*The game works even better outdoors with multicolored pasta (green, yellow, orange, etc.) You throw them in the grass and the students have to find them. And of course, the green pasta always wins. But it’s January… so indoors it is!