When we left off on Friday, we were making full models of atoms. In order to create a Potassium atom, we would count out 19 protons, put them in the nucleus… do subtraction to figure out that there were 20 neutrons, then put them in the nucleus… count out 19 electrons and sort them into shells… two in the first shell, eight in the second, eight in the third, and one in the fourth. What a pain in the butt!

Today we discussed a quicker way. It is called a Lewis Dot Structure. First, you write down the chemical symbol. Then you put dots around it to represent the electrons in the valence shell (the outermost shell). Then you’re done. What a time-saver! We can diagram a potassium atom in ten seconds rather than ten minutes. 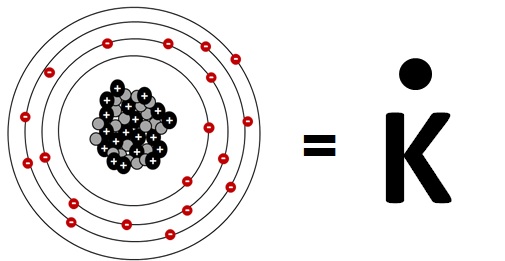 Today in class, students practiced making these diagrams, and then we discussed another time-saver. Because of how the periodic table is organized, you can often use a shortcut to figure out the dot diagrams: elements in the first column get one dot, elements in the second column get two dots, and so on. But be careful, this trick only works up to element 20 and it doesn’t work for Helium.